Adventures in the UK Day 2 – The Mary Rose

Today we’re at the Portsmouth Naval Yard. Lots to see here, but we have two main destinations in mind: The Mary Rose and HMS Victory. 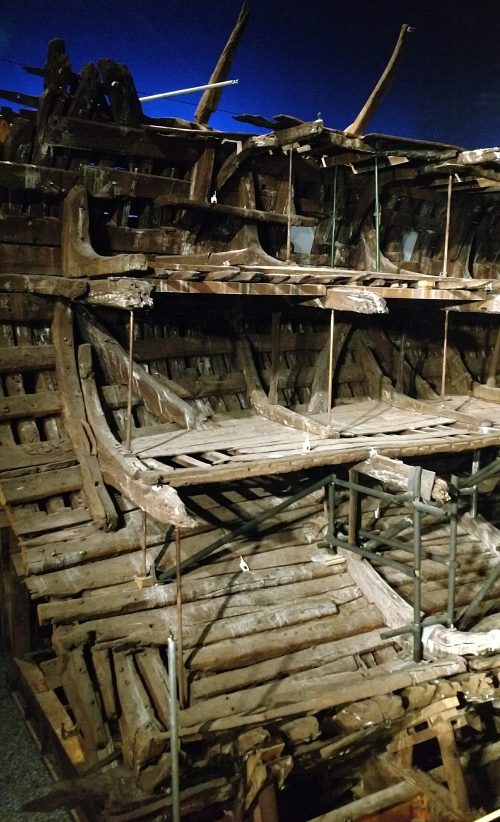 The Mary Rose was in service for 34 years and sunk unexpectedly off the coast of Portsmouth in 1545, during the Battle of the Solent.

This picture above is a view of one of the sides of the ship from the inside out, and you can see some of the different decks.

What struck me first was how much of the ship they were able to salvage, when you consider it’s been under water almost 500 years. The museum did a wonderful job of helping you visualize not only the full size of the ship, but what life was like on the ship. They projected holograms onto the vessel to show crew working in the different areas such as carpentry or the kitchen.

We also saw several displays featuring crew members whose faces had been reconstructed from their skeletal remains.

The HMS Victory was intact and looked beautiful. You could walk on all the decks, although if you were tall (or even no-so-tall), you had to bend over because the ceilings were quite low. I’m 5’6″ and I had to watch my head quite a bit, especially on the lowest decks.

Areas such as the captains quarters, the kitchen and the hold were presented with items accurate to the time period to give you an idea of how the ship looked in its heyday. Some pieces may have been original. 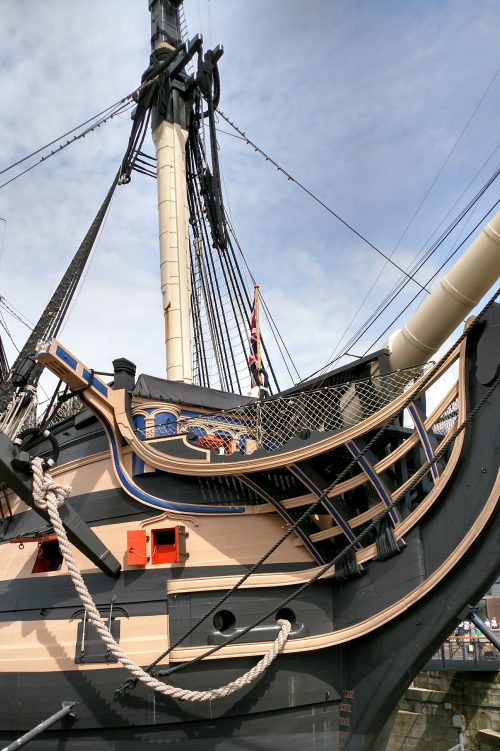 Most impressive were the rows of cannons (like the one you see below outside the ship) on both sides of the ship. Unfortunately, I was too busy bending over to protect my head that I didn’t get any photos of the cannons inside the ship. 😀

Tomorrow we’re headed to one of my most anticipated stops — Highclere Castle (aka Downton Abbey). Can’t wait! 😀

♥ August 18, 2022 ♥
Upcoming Online Workshops: Prep for NaNoWriMo the Bare Bones Way will be held Sept 5-30, 2022 at Fantasy, Futuristic, and Paranormal RWA (FF&P) and Writing the Romantic Novella will be held Sept 12-23, 2022 at Aged to Perfection Romance Writers. Registration is now open!

Dates for other workshops can be found on the Workshops page.

To be notified in advance by email of any upcoming workshops, please visit my Workshops page, and join my Workshops Announcements list.

♥ December 2, 2021 ♥
Character Journaling: Developing Stronger Characters from the Inside Out is now available as an Amazon Exclusive, FREE for Kindle Unlimited subscribers. Order your copy today! (and thank you for using my affiliate link).

Be first in line for news, sneak peeks, freebies and more! Sign up today.

I Made this Site With Wordpress.com – Make Your Site & Save $25!

Disclosure of Material Connection: Some of the links on this page are “affiliate links.” This means if you click on the link and purchase the item, I will receive a small commission. Regardless, I only recommend products or services I use personally and believe will add value to my readers. I am disclosing this in accordance with the Federal Trade Commission’s 16 CFR, Part 255: “Guides Concerning the Use of Endorsements and Testimonials in Advertising.” As an Amazon Associate I earn from qualifying purchases