Lost Without You: A Soul Mates Novella 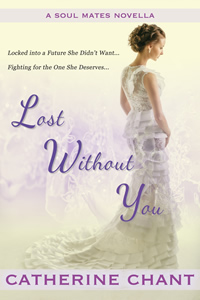 If you enjoyed the young adult time travel novel WISHING YOU WERE HERE (Book 1 in the Soul Mates series), LOST WITHOUT YOU picks up where events left off back in 1957 in the small town of Shelby Falls at the end of WISHING YOU WERE HERE, and follows Sable Courtney as she mourns the loss of her fiancé and tries to build a new life for herself.

Locked into a Future She Didn’t Want…

Fighting for the One She Deserves…

Joey Tempo’s fiancée Sable Courtney thinks her world has just ended with his fatal plan crash, but around the corner, waiting to be discovered, is the future she was destined to have all along.

Watch Sable as she breaks free of the role she’s been forced to play since childhood—that of a meek, obedient female expected to marry well and rear children—and finds the courage to forge a new path for herself, on her own terms. And she just might find her true soul mate along the way.

Read a Preview on Amazon HERE.

Also available at these online retailers:

What's on your mind? Cancel reply

This site uses Akismet to reduce spam. Learn how your comment data is processed.